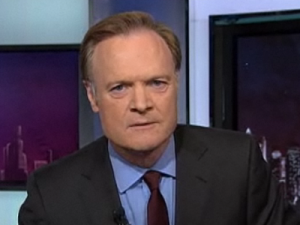 Well, we knew it was coming, but it doesn’t make the bigotry any less ugly when it rears its snarling head, as it did in a Lawrence O’Donnell segment this week. Now that Mitt Romney has the Republican nomination sewn up, the anti-Mormon bigotry parade has assembled and started its long march to the election. You may have seen some of the ugliness lately – it’s not hard to find. Most of it probably leaves fair-minded people scratching their heads, as in “Do Mormons REALLY believe all that?”

The answer is usually no – but I’ll admit: we Mormons believe some rather strange things. For example, we believe God the Father and Jesus Christ appeared to a 14-year old boy in upstate New York in 1820. We believe that same boy, with the utterly unremarkable name of Joseph Smith, received engraved plates of gold from an angel and, through revelation, translated those plates, published the translation that is now The Book of Mormon, and established a church with hundreds of adherents – all before he reached the age of 25. We believe in modern prophets and in personal revelation. The practice of our religion makes us objects of ridicule as well. No coffee, tea, tobacco or alcohol? No pre-marital or extramarital sex? Mormons in good standing pay a full tithe? Once polygamy was OK but now it’s not? A previous policy preventing the blacks from receiving the Priesthood that was rescinded by revelation as recently as 1978? Proxy baptisms for our deceased ancestors and other secret (we say sacred) ceremonies inside temples? Ceremonial undergarments as a remembrance of our temple covenants? Yes, yes, yes, yes, yes, yes, yes, yes, yes, and yes.

However, the curious and quirky novelty of those beliefs and practices are apparently not enough for those who hate us. They need to twist, distort, and even make up other things to REALLY make us look silly and even sinister. The current God of earth is a married man from the planet Kolob who was given Earth as his own when he died? Mormons are racist? Mormons don’t believe that Jesus is the son of God because Satan and Jesus are brothers? Joseph Smith “got caught having sex with his maid?” Women are inferior to men? Mormons are either polygamists or wish they were? No one but Joseph Smith ever saw the golden plates? Mormons believe that Native Americans are descended from Jews? Mormons are forced to serve missions so they can be brainwashed? Church leaders are rich and powerful? Mormons believe in magic underwear? No, no, no, no, no, no, no, no, no, no and no. Red flags for anti-Mormon bigotry – every one of them.

If it seems hard to understand what we believe to those outside the church, it’s because Mormon doctrine is so extraordinarily robust. It’s simple enough to learn the basics – Faith in the Lord and Savior Jesus Christ, Repentance, Baptism by immersion for the remission of sins, and the Laying on of Hands for the Gift of the Holy Ghost – in one lesson. And yet the history and doctrines of the church create such a comprehensive worldview that is so far-reaching and controversial that most of us Mormons study the scriptures every day of our entire lives and are still learning more. Yet perhaps the most remarkable thing is how much we Mormons generally see things so similarly and how united and cohesive the church is, especially as an all-volunteer organization with no paid ministry. We attribute it to the operations of the Holy Spirit; cynics attribute it to brainwashing, Borg-like assimilation, a cult mentality, or blind and mindless ignorance. In my experience, such cynics are ignorant and lack experience with the church and its members.

Most Mormons simply do not believe the things we’re often said to believe. The “out-there” things you hear are simply not taught in General Conference or Sunday School. You just never hear them discussed, and it’s not because we’re afraid to. They’re just irrelevant to us. Every Mormon, including respected church historians and Mormon scholars, are free to pursue the truth, too, so it’s not dogmatic consistency imposed and enforced by church leaders. When you hear about Mormons being excommunicated for opposing church doctrine or BYU professors being fired, it’s usually because they not only teach things about the church that aren’t true, but do so publicly to embarrass the church. Just ask Jan Shipps – a non-Mormon – if the Mormons are afraid of the truth. Trust me – most of the really out-there stuff is bigoted nonsense parading as unbiased (“former Mormon”) whistle-blowing. Some of the things you might hear, however – the apparent contradictions or anything hard to wrap your head around – are what we call “mysteries,” which every religion (and even science) has. Eternity itself is a tough concept to grasp – right up there with the idea of this universe existing in the first place.

So if you see something that seems on its face to be ridiculous, it probably is and has little to do with our real beliefs. It’s often twisted from something said by a prophet or church leader over 100 years ago. Brigham Young once gave a sermon in the morning session of General Conference and then came back in the afternoon and reversed his morning message, saying “this morning you heard what Brigham Young had to say – now you will hear what the Lord has to say.” You see, we have a sophisticated tolerance for humanity and human error – even when revelation is involved. Revelation is when the divine meets the human, and is therefore prone to the frailties of the flesh, so to speak – so the miracle is how nearly perfect it can be, enabling us to see a glimpse of divine perfection, not a compelling view of man made perfect by interaction with divinity. Where there is perfect knowledge (compelling proof no one can deny), there can be no faith, so providing such proof defeats the purpose of life – to learn by faith. But fundamentalist Christians have no such tolerance for the humanity or human error of any Mormon prophet, and therefore are almost always seriously mistaken when they say “Mormons believe this” or “Mormons believe that” and cite some obscure writings of a dead prophet. To them, the divine origin of the Bible means that it must be word-for-word perfect – never mind that it’s been transcribed, edited, compiled, translated, and published by imperfect humans. The inability to grasp this dichotomy between the human and the divine leaves them vulnerable to misjudgment about divine influence in their own lives and the lives of others. That’s why they can be so insufferably intolerant and hard-headed in defending their religious and political beliefs. They simply have no grasp of anything other than moral absolutes, in spite of the rich Western Judeo-Christian tradition of religious and philosophical depth and complexity.

So almost all of what Mormon antagonists, whether on the extreme left or the extreme right, parade as truth is not even close to it. If I said “Christians believe that a man who was executed as a criminal somehow climbed out of his grave,” how much truth is there in such an outrageously worded claim? Perhaps enough to make it somewhat recognizable, but not enough to keep it from being a bigoted falsehood. That’s a very good parallel to what happens when anti-Mormons try to portray Mormon beliefs and teachings.

But here’s what gets to me: Anti-Mormons argue from the presumption that all Mormons are ignorant and uninformed in believing what they say we believe. Yet nothing could be further from the truth. Most Mormons are very well informed about what the church teaches. We have a two-day general conference twice a year where most practicing Mormons listen to 8 hours or more of talks we believe to be inspired. We also have 3 hours of church teachings and meetings every Sunday. I laugh at the assertion that Mormons are mindless robots or dupes, because one of the fundamental teachings is “follow the spirit,” or in other words, each person is an autonomous free agent responsible for making their own choices about how to live their life. Well taught and well informed? Yes, much more so than most churches. Willing to trust and believe the prophets and apostles? Free to choose their personal beliefs? Again, yes. Only those who actively work against the church are excommunicated, as it should be. Brainwashed dupes and zombies? Hardly. Visit a church and see for yourself.

Mitt Romney is extraordinarily smart. He has the same Harvard Law degree President Obama has PLUS an MBA from Harvard. But you know the left will attempt to paint him as a clueless robot because he believes the straw man lies they’ll manufacture as “Mormon beliefs.” Don’t believe everything you hear or read, and as you consider whether to believe the lie that Mormons are brainwashed robots or some variation of that, consider some other intelligent, highly respected, well-known practicing Mormons: Stephen R. Covey – universally respected business guru; Orson Scott Card – science fiction writer; Ken Jennings of Jeopardy fame; Harvard professor and author Clayton Christensen, Kim Clark – former Dean of Harvard’s Business School, Columbia historian Richard Bushman, Gladys Knight; the Marriotts; Billy Casper – pro golfer; Dale Murphy – All Star baseball legend; the Osmonds; Jimmer Fredette; NFL Super Bowl MVP Steve Young; college and NBA Basketball star Thurl Bailey, Sports Illustrated high school basketball phenom Jabari Parker, American Idol David Archuleta; comedy actor Jon Heder; NFL Coach Andy Reid, and many, many more you may not have heard of but who have impacted your life, nonetheless – such as the inventor of television (Philo Farnsworth) or the founder of Jet Blue (David Neeleman). And if you really want to blow your mind, consider this: Eldredge Cleaver was baptized and died a Mormon, and both Glenn Beck and Harry Reid are practicing Mormons. So if you think we’re all stupid and brainwashed, you might want to reconsider. If Glenn Beck and Harry Reid were in the same Sunday School class, I guarantee you they wouldn’t be arguing because they’d be focused on those religious beliefs they share, not those political beliefs they don’t. If you want to know what we really believe, just lose the cynicism and ironic post-modernistic arrogance and then ask a Mormon you know in all sincerity, or call the missionaries and invite them over. Remember that if you ask them politely not to come any more, they’ll honor your request. They’re not about high-pressure – what good is a convert who’s not converted?

And study for yourself. I’ve never understood how anyone could reject The Book of Mormon without reading it and studying and thoughtfully pondering it’s contents. Also, if you want to read the best documented, most fair and accurate account of Joseph Smith’s life, read the comprehensive and fascinating historical work by Richard L. Bushman, “Rough Stone Rolling.” Bushman is the Gouvernor Morris Professor of History, Emeritus, at Columbia University and “Rough Stone Rolling” is far and away the most respected biography of Joseph Smith available today.

The people who are really being duped are those who give any credence to the cess pool of anti-Mormon propaganda put out by those who profit enormously from feeding the tremendous amount of anti-Mormon bigotry and ignorance in this country. Sad to say, but the biggest promoters of anti-Mormon information is those with the most to gain or lose – book sellers and preachers. But one things besides death and taxes is certain: we’ll be seeing a LOT of anti-Mormon bigotry over the coming seven months.