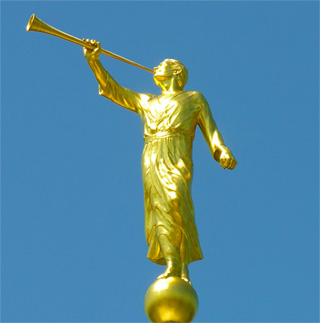 The Angel Moroni - What Do Mormons Believe?

Curiosity about Mormon beliefs have taken on a new life now that it looks like Mitt Romney will be the alternative to Barack Obama to be our next President. And as I pointed out in my last post, a lot of people are trying to define our beliefs for us. Grrr….how rude!

Joseph Smith was asked a similar question over 150 years ago by John Wentworth, the editor and proprietor of – how ironic – the “Chicago Democrat.” Part of Joseph’s response constitute what are now known as “The Articles of Faith,” and are now included in church scriptural canon, meaning that they are official doctrine. They’re a little dated, in the sense that they address matters of foremost concern to the people of 1842 rather than today, but they’re an excellent starting point in answering the question of “What Do Mormons Believe?” I’ll add some of my own observations about what Mormons believe below.

So here is one (divinely inspired) creedal summary of what Mormons believe:

1 We believe in God, the Eternal Father, and in His Son, Jesus Christ, and in the Holy Ghost.

2 We believe that men will be punished for their own sins, and not for Adam’s transgression.

3 We believe that through the Atonement of Christ, all mankind may be saved, by obedience to the laws and ordinances of the Gospel.

4 We believe that the first principles and ordinances of the Gospel are: first, Faith in the Lord Jesus Christ; second, Repentance; third, Baptism by immersion for the remission of sins; fourth, Laying on of hands for the gift of the Holy Ghost.

5 We believe that a man must be called of God, by prophecy, and by the laying on of hands by those who are in authority, to preach the Gospel and administer in the ordinances thereof.

6 We believe in the same organization that existed in the Primitive Church, namely, apostles, prophets, pastors, teachers, evangelists, and so forth.

7 We believe in the gift of tongues, prophecy, revelation, visions, healing, interpretation of tongues, and so forth.

9 We believe all that God has revealed, all that He does now reveal, and we believe that He will yet reveal many great and important things pertaining to the Kingdom of God.

10 We believe in the literal gathering of Israel and in the restoration of the Ten Tribes; that Zion (the New Jerusalem) will be built upon the American continent; that Christ will reign personally upon the earth; and, that the earth will be renewed and receive its paradisiacal glory.

11 We claim the privilege of worshiping Almighty God according to the dictates of our own conscience, and allow all men the same privilege, let them worship how, where, or what they may.

12 We believe in being subject to kings, presidents, rulers, and magistrates, in obeying, honoring, and sustaining the law.

13 We believe in being honest, true, chaste, benevolent, virtuous, and in doing good to all men; indeed, we may say that we follow the admonition of Paul — We believe all things, we hope all things, we have endured many things, and hope to be able to endure all things. If there is anything virtuous, lovely, or of good report or praiseworthy, we seek after these things.

I would add a few items of modern relevance:

– We believe that the Priesthood, or authority of God given to man to unify and serve His children on earth, which Priesthood had been bestowed by Jesus Christ upon the apostles of the original Church of Jesus Christ as established by the Savior, was lost sometime after those Apostles were killed.

– Thus, we believe that a restoration / restitution was necessary – of the Priesthood, of the church, and of the Gospel of Jesus Christ, because all were lost or became corrupted over time.

– We believe that the fullness of the Gospel of Jesus Christ was restored through the prophet Joseph Smith, who was called by God when, as a boy of 14, he went into the woods to pray about which church he should join. At the time, he saw in a vision, God and his Son, Jesus Christ, who told him he should join none of the churches, because “they draw near to me with their lips, but their hearts are far from me…” A few years later, the angel Moroni appeared to him and began his instruction, which eventually led to Joseph receiving the golden plates which he translated and which became The Book of Mormon, which is Another Testament of Jesus Christ – a modern witness of Jesus Christ and the restoration of His church and gospel. If The Book of Mormon is true, then so is the restoration and Joseph Smith must be a prophet. Hence, the importance of The Book of Mormon, even though we believe The Holy Bible to be the word of God just as is The Book of Mormon.

– We believe that the lesser, or Aaronic, Priesthood was restored when John the Baptist, as a resurrected being (an angel), appeared to Joseph Smith and Oliver Cowdery on May 15, 1829 and laid his hands upon their heads and pronounced: “UPON you my fellow servants, in the name of Messiah I confer the Priesthood of Aaron, which holds the keys of the ministering of angels, and of the gospel of repentance, and of baptism by immersion for the remission of sins; and this shall never be taken again from the earth, until the sons of Levi do offer again an offering unto the Lord in righteousness.”

– We believe the greater, or Melchizedek Priesthood, was restored soon thereafter when Peter, James, and John also appeared to Smith and Cowdery and bestowed the “Holy Priesthood after the Order of the Son of God” upon them.

– We believe that the Savior and the prophets Moses, Elijah, and Elias appeared to Joseph Smith and Oliver Cowdery in the Kirtland Temple to restore the keys of the gathering of Israel, temple work, and previous dispensations.

– Thus, we believe that The Church of Jesus Christ of Latter-day Saints represents a restoration of the ancient church, with apostles and prophets holding all of the Priesthood keys necessary to administer the Church under the authority and direction of Jesus Christ.

– We believe that in the mouths of two or more witnesses shall all things be established; hence, there were many witnesses to many of the miraculous events of the restoration. Besides Joseph and Oliver Cowdery as mentioned above, there were eight others who testified of handling the golden plates, and three who said the angel showed them the plates. There have also been many other witnesses of miracles, visions, and revelations.

– We believe that the fullness of the Gospel of Jesus Christ was also restored through modern prophets and through the miraculous coming forth of The Book of Mormon.

– We believe that the Constitution was a divinely inspired document, and that without it and the religious freedom it granted, the church and the gospel could not have been restored to the earth.

– We believe that freedom to choose what we will believe is one of the greatest of the gifts of God to his children.

– We believe in eternal marriage, and that family relationships are forever. We believe that through the ordinances of the temple, families can be united in love and harmony in the glorious hereafter.

– We believe in service, love, harmony, and being of good cheer. We believe that God gave us commandments as principles of happiness, and that through our obedience to God’s commandments, we show our love for God and for our fellow man, and are blessed with peace and joy as a result.

– We do not believe that by following God’s commandments, we will be a peculiar people, and not “of the world.” We’re OK with that. We both freely give and rely on the tolerance and goodwill of our brothers and sisters with whom we live in this worldly state.

It is a rich and abundant worldview, so there is much that I’ve left out – but we’re always happy to answer questions. Keep it loving and respectful please!

Next post: Bill Maher Joins the Anti-Mormon Bigotry Parade With His Savage Ignorance

Previous post: What Mormons REALLY Believe – Get Ready for the Anti-Mormon Bigotry Parade