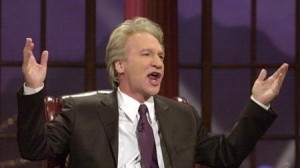 Here they go again. The anti-Mormon bigotry parade is on the march. This time it’s Bill Maher who is beyond ignorant and clueless; he’s execrably wrong.

At this article on Real Clear Politics, Bill Maher responded to S.E. Cupp’s comment that Mitt Romney gives a lot of his money to charity every year with: “I got to call bulls**t on that one. All his charitable donations are to Mormons. He gives to his cult.” “They’re not poor people,” he said. “Name one poor Mormon.”

Wow. I know that’s a knee-jerk response by the wholly uninformed Maher, but nonetheless, where does one start in on such savage ignorance?

First of all, based on my experience, I’d say that most of the converts joining the church are poor. Rule of thumb: the rich are proud; the poor are humble. More than half of the Mormons in the world live outside the U.S. I’ve had four children who served missions. Most of the dozens of people they collectively baptized were certainly what anyone in the U.S. would classify as “poor.” When picking up three of those children from their missions, I’ve been in at least 15 such homes in Mexico, Poland, and Argentina. They may be poor by our standards, but they’re happier and certainly more loving on their worst days than Bill Maher is on his best day. And their lives inevitably improve after they join the church – or at least they will tell you they do. It’s partly because they stop worrying about money and discover the truth about happiness – it comes from love and family and service and humility and principles Bill Maher was obviously never taught.

But we believe that they’re blessed financially as well. If Bill Maher doesn’t know any poor Mormons, perhaps it’s because of those blessings – not that I would expect him to understand that concept of a just God blessing those who love God and abide by His commandments (principles of happiness to live by), which are given to His children because He loves them.

He should consider how much the Romneys have donated to causes other than the church. It’s probably still more than the Obama’s have donated to liberal-preferred, politically correct charity, even on a % basis.But you also have to look at what that “cult” does with its money, remembering that everyone in the church I’ve ever known considers all money to be a sacred trust, since even the poor pay with their widows mite just as Romney pays with the many millions he donates to the church – if only the government (especially the Obama administration) would look at taxpayer money that way:

1) A negligible percent goes to supporting church operations, because none of the church leaders get paid in the traditional sense. The needs of General Authorities (many, but not all, of whom are well off before they’re called) are met, but none of them live a higher standard of living after becoming a General Authority than before. If they were, you’d have certainly read about it by now. None of the local leaders are paid, not even a stipend – and almost every member of the ward has a “calling.” Nobody picks their own callings. Most just serve when called.

2) The church takes care of its own poor. Members fast once a month and donate the money they would have spent on food to the church as a “Fast Offering.” That money is then administered by the Bishop to meet the needs of the poor. During the Depression, the church started a welfare program to promote independence and self-reliance. Reagan said about it “Oh that our federal welfare worked so perfectly.”

3) Chapels and temples are built worldwide. In Africa and many other poor countries, they’re building new chapels regularly – that serve not just the people’s Sunday worship needs, but also act as community centers of sorts. Church members love the temples and temple ordinances, including eternal marriages.

4) Disaster relief. The church is known throughout the world as being one of the leading providers of disaster relief. If you have never been to Salt Lake City and toured the Humanitarian Center, you owe it to yourself to see it. You’ll be blown away. The church, like Romney, doesn’t toot its own humanitarian horn. After Katrina, it’s reported that the mayor of one town said “I want to thank two group who were here first and did the most to help us out and provide us with what we needed: one is the Church of the Latter-Day Saints, and the other is the Mormons.”

Thanks, Bill, for your ludicrous, humorless nastiness that gives me the chance to set the record straight.

Next post: Barack Obama’s Religious Beliefs and Baptism for the Dead