Barack Obama’s Religious Beliefs and Baptism for the Dead 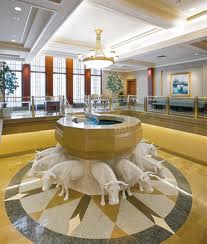 I just read a fascinating 2004 interview with Barack Obama about his religious beliefs.

What struck me was this comment from the interview:

“I find it hard to believe that my God would consign four-fifths of the world to hell.
I can’t imagine that my God would allow some little Hindu kid in India who never interacts with the Christian faith to somehow burn for all eternity.” – Barack Obama

The above statement seems to put Obama on the outside looking in at traditional Christianity, because most Christians believe quite literally the Biblical passages that seem, on their face, to be quite exclusive, such as:

“Except a man be born of water and of the Spirit, he cannot enter into the kingdom of God.” – John 3:5

Now, I wholeheartedly agree with Obama on these particular points, and I’ll note for the record that this is why I love the LDS (Mormon) belief in and practice of proxy baptisms for the dead.

Other Christians see false dichotomies in the conflict between universal salvation and the acceptance of Biblical truth. For example, they might believe that you must either accept Christ and be baptized to be saved, or you are damned.

Joseph Smith struggled with this same question, especially after his unbaptized brother died, and several of his children died in their infancy. The revelations he received make it clear that salvation is far more universal than anyone of Joseph’s day ever imagined. Here are some of the things Joseph taught, in my words, not his:

Because of the resurrection of Jesus Christ, every living soul will be resurrected and are thus saved (from death) (See I Corinthians 15:22).

Heaven and hell describe the period of time between death and the resurrection, where spirits are consigned to paradise (a place of peace) or spirit prison (a place of suffering for ones sins).

All spirits continue to progress in faith and learning even after death.

When we are resurrected, our spirits are re-united with our bodies, and receive one of many degrees of glory, within 3 primary degrees (the celestial, terrestial, and telestial) corresponding with the glory of the sun, moon, and stars. (See I Corinthians 15:40)

Those who die unbaptized, with or without knowledge of Christ, can still be saved if they repent and accept Christ as their Savior in the spirit world before resurrection – but they must still be baptized; hence, God had revealed to his children through his prophets the means whereby this can be accomplished, even during the time of the apostles (See I Corinthians 15:29) and again through Joseph Smith in latter days. It’s simple: the living may be baptized on behalf of the dead, through proxy baptisms. This is also in fulfillment of the prophecy in Malachi 4:5-6.

We believe Elijah appeared to Joseph Smith and Oliver Cowdery in the Kirtland Temple to restore the keys of the work of the temple whereby such baptisms are performed, and that by serving our ancestors by seeking out our dead and ensuring that they receive baptism and other temple ordinances, we are turning our hearts to them and theirs to us.

And that’s why we Mormons agree with Barack Obama about this particular matter regarding God’s universal love for every one of his children on earth. We can confirm that God will NOT “consign four-fifths of the world to hell,” and He will indeed NOT allow “some little Hindu kid in India who never interacts with the Christian faith to somehow burn for all eternity.” Little children who die are taken straight to heaven. Those who die in ignorance of the Savior have every chance in the next life.

We Mormons show our love for that little kid in India by going into our temples to be baptized on his behalf, and we have every confidence in a joyous reunion in the next life where we will rejoice together in the love and mercy of a nonetheless just God.

But bitter haters who can’t see beyond death don’t understand any of this. They simply think that we Mormons are trying to pad the number of our converts or take pride in reporting that famous people are now Mormon. I honestly don’t know whether to laugh or to cry…

Next post: What I Know; How I Know: What I Believe; Why I Believe